Iconic rocker.  Gifted song writer.  The leader of one of those few bands who have put out hit songs over several decades...  Even if you don't consider yourself a Tom Petty fan, I bet you can sing along with at least ten of his songs, word for word.  He had a way of writing songs that were eternal.  They didn't seem to age and get old.

In 1989, after a couple years at Unreel Productions, I had become the staff cameraman.  For those who don't know, Unreel was the video production company owned by Vision Skatebpards.  In those days, that meant traveling, often solo, to 2-Hip contests around the country, lugging a 35 pound, $50,000 betacam video camera with me.  Yeah, professional video cameras cost more than a damn nice car in those days.  I also did a lot of shooting behind-the-scenes footage of Vision skateboard and BMX photo shoots.  I also got to shoot footage of Vision Street Wear fashion photo shoots.

Even so, it was a total surprise to me when I walked in one day and a couple of the women in the promotions department said, "Lucky you, you get to hang with Tom Petty today."  "Huh?" I replied.  No one had bothered to tell me.  So I was given an address, and I packed both the big, pro betacam, and a smaller SVHS camcorder into the trusty Unreel Toyota van.  I headed out of Costa Mesa, all the way up through Hollywood, to Mulholland Drive, a road that snakes through the Hollywood Hills.  It's a super rich area, comparable to Malibu or Beverly Hills, with big fancy houses hidden mostly in the trees, each with a view of either Hollywood and L.A., or the San Fernando Valley on the other side of the hills.  The address turned out to be a narrow driveway that snaked between two properties to a lot about a third the size of a football field.  The grassy chunk of land had a magnificent view of Universal City and the East side of the San Fernando Valley.

Mike Miranda, the Vision BMX team manager, was there already, with the Vision Skateboards trailer mini-ramp.  And we were it.  So he carefully turned the truck around, and I helped him set up the ramp in the lot.  Just as we were finishing the 20 minute process of getting the ramp set up and solid, people from the music video crew showed up.  The director looked at the ramp from a couple different angles, walking beside it.  In typical Hollywood fashion he said, "I need you to move the ramp... about a foot that way," and he pointed.  Mike and I started laughing.  Then we realized he was serious.  So we folded the ramp back up, and wiggled the pick-up pulling it back and forth, and set up the ramp for a second time, taking well over half an hour.  By then, we both decided the director was a fucking idiot.

By the time we had it set up again, the herd of white production trucks and "real" Hollywood crew people were there, setting up all their stuff.  One of the best things about a big budget "Hollywood" TV or movie shoot is something called the Craft Service table.  Basically, it's a table of free food for everyone working, continually replenished, all day long.  Fruit, bagels, muffins, cookies, chips, sodas, coffee, the works.  Oh, and we got a catered lunch, as well.  I pulled the small, inconspicuous SVHS camera out, and started shooting behind-the scenes footage with my right hand, while chowing down free muffins with my left.  I didn't have a boss all day.  I didn't work for the music video crew.  That's about as good as a camera job gets.  It was a vacation day to me.

Now to all of us at the time, Tom Petty was an older rock guy who had several good songs.  I wasn't particularly a fan.  The crazy thing was, "Freefallin'" was the first major music video on MTV that showed skateboarding.  Really, skating in a music video was unheard of then, except for a couple indie band videos that played on MTV's "120 Minutes" show once in a great while.  Not only did the "Freefallin'" feature pro skaters, it featured a girl skating.  There were only a handful of women skaters then, Care Beth Burnside being the best known.  So somehow, thanks to the Vision promotions department and a video director we hated, skating was getting huge, mainstream viewing.  This was five to six years before the X-Games.  None of us from Vision could really believe it, but we just rolled with the concept.

The three featured Vision skaters were vert skater (and Tony Hawk's roommate) Joe Johnson (white shirt), vert skater Eric Nash (blue/gray striped shirt), and street skater Kele Rosecrans (turquoise shirt).  The three of them were more than happy to spend the day hanging out with the three actress/models starring in the video.  The lead actress, the one you see doing fakies, had never skated before.  But she was a longtime surfer.  So the skaters were happy to grab her by the hips and push her back and forth until she learned to fakie fairly well.  In half and hour she was pumping back and forth across the ramp.  It was pretty impressive.

In typical Vision Street Wear style, the three lead girls were adorned in what we (at Vision) called "Vision Slut Wear."  After the Vision Street Wear logo shirt made waves in the "real" fashion world the year before, Vision designers made Vision Street Wear clothes for women, which never sold well at all.  Our inside joke was that the stuff only looked good on Gator's girlfriend.

But few realize there was a fourth Vision skateboarder there in the video as well.  At 2:47 in the video, you see Kele air on the opposite side of the ramp, and there's another attractive woman there in black shorts and a white top.  That's Miki Keller, one of the few women on earth at the time who actually could skate a mini-ramp well.  Miki was a serious snowboarder then, and was the Sims Snowboard team manager.  Unfortunately, Miki's skating got left on the proverbial "cutting room floor."  That's a bummer.  But her skating made the lead actress look lame, which is probably why.
Miki was not only a pioneer in snowboarding, but she later got into women's motocross and built that into a legit sport.  I was always to shy to ask Miki out when I worked with her.  My loss.

Anyhow, at one point while the crew was setting up the next shot.  Tom Petty was pushing his daughter on the camera dolly.  That's a contraption on a little set of railroad tracks, where a film camera is mounted and a crew person pushes the dolly along as they shoot.  So from maybe ten or fifteen feet away, I pointed my camera at Tom and his daughter.  He saw me shooting, and he had no idea who the hell I was, or where the footage would end up.  But he didn't get mad or flip out.  He said, kind of sarcastically, "We want royalties on that video," and then cracked a smile.  I got the message, and turned the camera off and nodded.  He nodded back, and went back to talking to his daughter.

I later worked on a bunch of TV shows, and I've seen stars throw fits and be complete assholes at times.  But Tom Petty was cool as could be.  When I invaded his personal time with his daughter, he politely got me to chill out and give them their moment to just hang out without being taped.

I ended up giving Eric and Kele rides home after the shoot, and then drove the van home, since it was after work hours.  It was a great day of getting paid to hang out, seeing what a "real" film shoot was like, and eating way too much free food.

The video came out soon after, and went into major rotation on MTV.  I still think the director was a dork.  But I can't really picture any other video for that song now.  Skateboarding snuck into TV screens around the world in a weird way, and I started listening to a lot more Tom Petty music after that.  The thing I like best about his music is that his songs are timeless.  They don't just sound like a particular era or genre.  Tom Petty and the Heartbreakers put out great songs over about 40 years or so.  Everyone has to die sometime, and it's a shame to see Tom Petty leave this world at only 66 years old.  But he left us all a great treasure of music that will live on.  And in my case, it's nice to have met someone who was not only an incredibly prolific and talented musician, but a damn cool guy as well.

Join the jam circle in the afterlife, Tom, there's a lot of great talent there that we all miss.

How long Have I been thinking about Creative Scenes?

This is an article about my Sharpie Scribble Style artwork, in the local Kernersville, NC newspaper, from October of 2016.  As you can see, ... 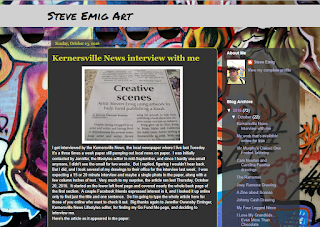 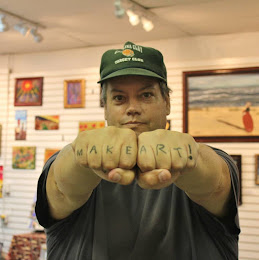